The Handmaid’s Tale is a dystopian-style tale set in a radically theocratic America. The regime, called Gilead, has classified women into based on fertility and obedience, with different ranks identified by their unique uniform. All women are completely stripped of their rights—everything from reading to purchasing power—and are sorted into classes to divide and control them. Handmaids are fertile women who serve as surrogate wombs for the Commanders and their aging wives. The Wives—women married to the powerful Commanders—are reduced to days of knitting, gardening, and waiting for their Handmaid to give birth to their children. Handmaids are completely powerless, and everywhere they go, there are Eyes—the military division of the Gilead regime—watching and waiting to kill them for any misbehavior.

One reviewer writing for The Verge called it “1984 for feminists… but a lot scarier”. This theocratic society has based its societal revolution on a passage in the book of Genesis about Jacob’s wife, Rachel, allowing her handmaid to conceive Jacob’s child on her behalf. This passage is recited in the book during the monthly ceremony in which the Commander attempts to impregnate the Handmaid under the Wife’s watchful eye. If a Handmaid cannot reproduce, she is sent to a labor internment camp with other Unwomen—old and infertile women who are no longer valuable to the society. Handmaids are only containers for babies, and nothing more. END_OF_DOCUMENT_TOKEN_TO_BE_REPLACED 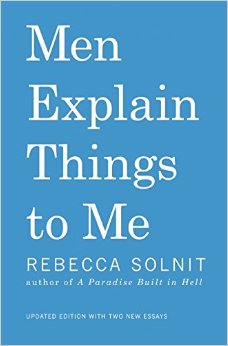 The abundance of rape and violence against women is almost never treated as a human rights issue, let alone a crisis, or even a pattern. It takes very little inference to recognize that the violence and assault that women face is an extremely prevalent issue that needs to be addressed immediately. Men Explain Things to Me is a provocative collection of short stories and essays that address the core of the gender inequality issue: a deeply rooted craving for men to have control over women’s lives. Through honest examination of case studies and cultural attitudes, Rebecca Solnit demonstrates that the incidents that are so often seen as isolated events are all, in fact, very connected and illustrate a much larger social problem.

One of the soaring successes of Solnit’s collection of essays is the effortless grace with which it presents gruesome and heavy topics. I felt like I was speaking with a wise colleague, or perhaps my best friend’s cool older sister. The book begins with the title essay, “Men Explain Things to Me”, in which she introduces the idea of “mansplaining”: men explaining things to women in a condescending or patronizing way. Solnit recounts a posh party in a luxury cabin in Aspen. One man began asking her about her numerous book publications, and when she mentioned her latest book about Eadweard Muybridge, he immediately began recalling the “very important Muybridge book that came out this year”. It took multiple interruptions and comments for him to realize that this “very important” book was her book. She continues to discuss the slippery slope of silencings. The presumption that women’s thoughts and emotions are somehow invalid crushes young women into silence by indicating, in the same way that street harassment does, that this is not their world and that the truth does not belong to them. When we tell women they are not reliable witnesses to their own lives, we annihilate their very real and valid experiences, opinions, and accomplishments.