About a year and a half ago, I got really sick. I’m still not sure exactly what I had; it must have been some form of tonsillitis. All I knew was that it lasted for two weeks and I was absolutely miserable. I couldn’t eat anything because it felt like fire in my throat when I tried to swallow, and I could barely open my mouth wide enough to get a spoon in. I was never hungry and all I could stomach was applesauce, water, and occasionally some ice cream. Because of this, I lost around 10-15 pounds in two weeks. I never actually weighed myself, but I knew I had lost a lot of weight from other people’s reactions to me.

I went home and got a lot of surprised looks from people close to me. They commented that I looked great and that I must have lost weight. I told them that I lost the weight because I had gotten very sick, but they somehow ignored that and kept commenting on how great I looked. At one point, after I had told them that I was sick, someone asked me if it was healthy that I had lost this much weight in so little time. I was taken aback, as I had already told them no, it absolutely was not healthy. No one had asked me if I was okay, if I was still sick or what I thought I had. No one really cared about my health at that moment, they just saw that I was skinny.

END_OF_DOCUMENT_TOKEN_TO_BE_REPLACED

She is perched at the top of a steep, concrete step, the curve of her calf accentuated by the strain of her pose. There are her legs, tan and endless; a flip of a sleek ponytail; the seductive pucker of her lips as she peeks over her shoulder and leers at the camera; the strip of her flat belly, framed by her tight black crop top and the Daisy Dukes clinging to her waist; then, finally, her perfect butt, like two crescent suns emerging from the clouds of denim.

I am almost salivating, wanting to shout, “Damn, look at her butt!” but I keep my thoughts to myself.

I am not the best feminist.

END_OF_DOCUMENT_TOKEN_TO_BE_REPLACED

By Sierra Rothermich
A son and his father are in a horrible car accident. The father dies on impact and the son is rushed to the hospital with severe injuries. The surgeon looks at the son when he arrives at the hospital and says “I can’t operate on him, he’s my son.”

Can you explain this?

END_OF_DOCUMENT_TOKEN_TO_BE_REPLACED

During my three years at the University of Idaho, I’ve experienced several instances of women being shamed based on their clothing choices. Getting ready for a night out with my girlfriends usually entails picking out outfits we feel confident in. We embrace each other’s style and feel empowered by the freedom of being able to wear whatever we desire. However, last weekend, things took an offensive turn.

During a party, a guy came up to one of my girlfriends, (who was wearing a black long sleeve, low cut shirt,) and told her to, “Cover up” three times. My friends decided to set a social moral standard and asked him to leave the party, because we would not condone those types of comments. The guy attempted to excuse his behavior by claiming, “I’m from a small town.” As much as I wanted to say, “The size of your town shouldn’t indicate the size of your brain,” I realized I must understand what caused a thought process like this and the answer is: Society. So, if I want to help change the way society thinks, defensive comebacks will not be effective in educating people on their flawed logic…

But here is what will — END_OF_DOCUMENT_TOKEN_TO_BE_REPLACED

Feminism? What is the significance or meaning of that word?

When searching different sites, I found many definitions.

A word that holds a lot of controversy. Wow. No wonder many people can either be in favor or against feminism based on these definitions. When I asked myself, “How do I define feminism?” I tried to find the right response that makes sense to me. I put a lot of thought into it and here is my response. A while back I saw a picture on Facebook about fairness. Link here…

There is a huge difference. For example, Equality is about everyone being fair and being treated fairly. While Equity is about equipping people with the same resources to have the same shot at something. If everyone were treated the same (for example, in this picture boy number three would not be able to see the game. While in the second picture, boy number two and three were given the resources to be able to see the game like the first boy.) Applying it to Feminism, it’s not about being treated better it’s being giving the same resources to be able to succeed in life, workforce, education. When women do succeed it’s not celebrated. Most treat it as if it were not possible.

I asked a few of my friends what their definitions of feminism are. These were their responses:

“I define Feminism as equal pay in the workforce, no matter the gender.”

“Much more than women getting paid equal it’s also about bringing up everything that is wrong with society. Talking about issues that people feel uncomfortable talking about and taking a broader aspect.”

“Having equality and equity between all genders. Not just men having power but respecting and realizing that women can too.”

“Feminism is asking for equity in human rights. Nothing more. Men can be allies to the movement, so in a way, men can be Feminists.”

“Feminism is women being able to make decisions over issues that affect women and be treated socially equal to men.”

END_OF_DOCUMENT_TOKEN_TO_BE_REPLACED

Cat-calling, objectifying, sexually harassing, rape. According to the Pew Research Center, two-thirds of Americans say recent reports of sexual harassment and assault are more reflective of widespread problems in society rather than acts of individual misconduct. Because violating women’s rights is a social norm, globally, violence against women is a detrimental public health issue.

The World Health Organization reported that one in three women worldwide have experienced either physical and/or sexual intimate partner violence or non-partner sexual violence in their life. According to the World Health Organization, men are more likely to perpetrate violence if they have low education, a history of child maltreatment, exposure to domestic violence against their mothers, harmful use of alcohol, unequal gender norms including attitudes accepting of violence and a sense of entitlement over women. This provides evidence that men are taught to be violent against women due to a society that deems misogyny as socially acceptable. END_OF_DOCUMENT_TOKEN_TO_BE_REPLACED 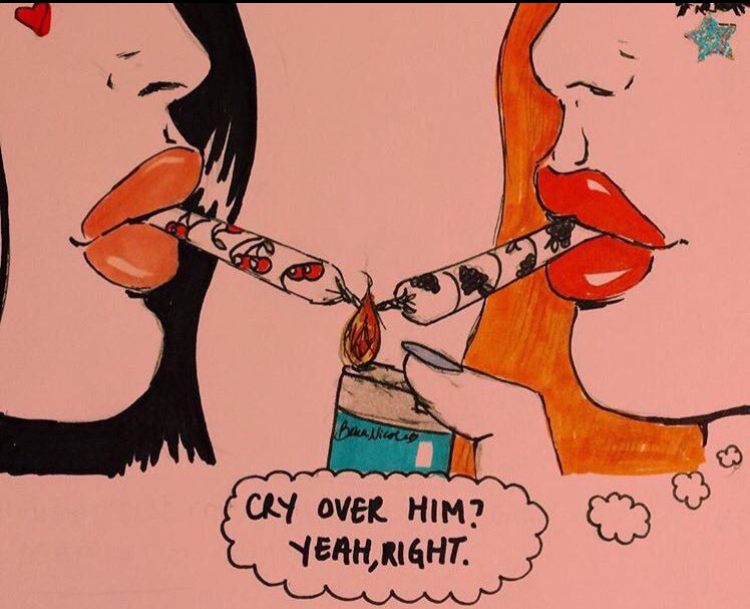 When I say the word “no”, I mean it. Unless someone is offering some of their food, because in that case I’m just trying to be polite. But in almost every other situation, the word no means what the dictionary says it means. No is equivalent to no, a definitive denial or refusal towards, for, or about something. This principle of saying the word “no” and meaning it applies to everything, except interactions between a man and a woman when she says she is not interested. When a man is pursuing a woman either romantically, sexually, or both, it seems like the word “no” and the phrase “no thank you” or even the utterance of “no I am not interested” is hardly taken seriously. Apparently in our society “no” means “yes sir, keep trying, I’ll come around.” END_OF_DOCUMENT_TOKEN_TO_BE_REPLACED

Take a walk through any department store toy aisle, and you will see labels that ensure we know which toys are meant for girls and which toys are meant for boys. Pink and purple pastels surround “girl” aisles filled with dresses, dolls, and kitchen sets. Red, blue and orange dominate the “boy” aisles—these sections have trucks, guns, and tool sets. The divides between these toy aisles go much deeper than just playthings for children—they set the patterns for socialization and behavior for a lifetime.

Admist this sea of pink and blue, there are parents (and their kids!) who appreciate gender-neutral marketing. This February, Target decided to ditch its gendered children’s home décor lines with their new collection, “Pillowfort”. The line focuses on prints and colors that can appeal to any child, with themes like “Tropical Treehouse”, “Ocean Oasis”, and “Stellar Station”. The collection’s February debut was met with positive appreciation—the line is meant for all children; “cute enough for a three-year-old, cool enough for a ten-year-old”. This is one positive step in a growing movement towards gender-neutral décor and toys for kids. END_OF_DOCUMENT_TOKEN_TO_BE_REPLACED

“Would the world seem entirely different if it were pictured, felt, described, studied, and thought about from the point of view of a woman?” Epistemology is the study of knowledge, and is primarily concerned with the conditions, sources, structure, and limits of what one can sufficiently know. Feminist epistemology studies “knowers” in relation to the knowledge they possess. It studies the content of what is known, they way it is known, and how this manifests in situations, perspectives, and behavior. This branch of philosophy addresses background beliefs, gender roles, gender norms, and performance/behavior. The meaning of “knowledge” can alter if it is subjected to the scrutiny of social context.

Society’s knowledge of women can shape the perception of women. “Impersonal knowledge is coded as “masculine” while personal knowledge is coded as “feminine.” The former enjoys higher prestige than the latter. This has the potential to affect the way women perceive themselves. In school, boys are thought to be better at mathematics than girls. The lack of sufficient statistics supporting this belief suggests this is not actually the case. There is no difference in performance before the age of seven. “Mathematics is considered masculine and therefore prestigious.” Because of the way they are socialized, girls come to believe they are inferior to boys mathematically. The self-fulfilling prophecy indicates that the expectation about a situation affects the behavior of an individual in a manner that causes the expectation to be fulfilled. The expectation that girls have regarding their mathematical performance is reflected in their efforts and resulting performance in later years of education. END_OF_DOCUMENT_TOKEN_TO_BE_REPLACED