The Strong Female Character has existed in films for decades, but is making a surge in young adult literature. Such authors as Veronica Roth, Suzanne Collins, Leigh Bardugo, and Cassandra Clare tend to dominate discussions or mentions of anything related to the Young Adult genre, especially that of strong female characters. These women are part of a group of prominent female YA authors who have offered up pieces of art which empower young girls to be better than what the common media is asking them to be. Collectively, they are all accomplishing the same goal— young female characters who teach young female readers how to be bold and stand up for themselves. Although, these authors are not independently doing anything unique. In fact, there are a few articles that would argue they’re all doing mostly the same thing and that in the end it is still problematic.

END_OF_DOCUMENT_TOKEN_TO_BE_REPLACED

The Bechdel test is now commonly accepted as the minimum requirement of female representation in the film industry. First appearing in a comic written by Alison Bechdel in 1985, the test has been used countless times over the past three decades to judge films from a feministic outlook. It has been used by scholars to determine whether there is female representation in movies and media. When 1,794 movies released between 1970 and 2013 were analyzed, only 40% of them passed the Bechdel test, so this prompts the question of whether or not this a good formula to deem a movie worthy. In order to determine whether or not the Bechdel test is truly feministic, we will break down three facts about it: what exactly passing the test entails, what degree of successful movies pass the test, and what movies pass the test and whether or not movies that pass show a depth of female characterization.

END_OF_DOCUMENT_TOKEN_TO_BE_REPLACED

For decades the work of female musicians has been undermined by the work of their male counterparts, yet in the 90s, 00s and now the 10s that will soon move into the 20s the music industry — and music as a whole — is straying away from an ongoing landscape that has been long dominated by men. The transition however could not be possible without forward thinking and passionate musicians, and in this article I have decided to take note of a few of these creative female producers that to me are pioneering this changing battleground of sound!

END_OF_DOCUMENT_TOKEN_TO_BE_REPLACED 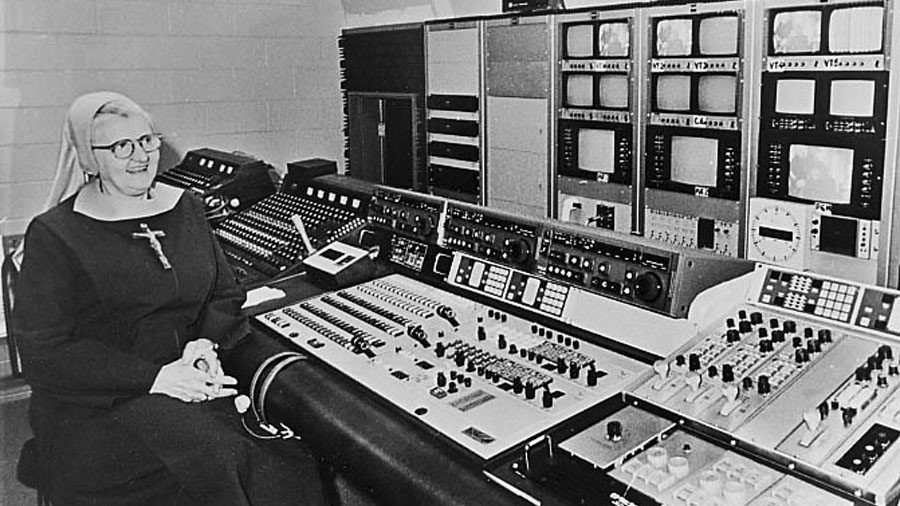 Mother Angelica is my hero. It’s a name anyone who works in media should know. Although small and unassuming, “she was the only woman in television history to found and lead a cable network,” says her biographer Raymond Arroyo. But before she was broadcasting to millions in their home, she was just a small girl from a bad part of town in Canton, Ohio. I will give a trigger warning; Angelica’s early life was not a happy one. There is mention of child neglect and suicide in this post; proceed with caution.

Before Angelica There was Rita

Before Mother Angelica entered religious life, she was Rita Rizzo, a tough girl with a big attitude and bigger heart. Born on April 20, 1923 in Canton, Ohio, Rizzo had everything stacked against her. By all odds she should have died in the poverty she was born into. Her grandparents were Italian immigrants, her parents divorced, and even the Catholic nuns in her school seemed to look down on her. After her mother divorced her deadbeat father, they were left with only each other. Her mother, Mae Francis, fell into depression and Rizzo became her emotional rock at a young age. Between her mother’s breakdowns, rat-infested living conditions, and her own health problems, Rizzo never had a real childhood.

END_OF_DOCUMENT_TOKEN_TO_BE_REPLACED

“I did work at a mall in college- I think working retail/customer service is one of the most hideous jobs in the world.” – Jayma Mays (Actress/Singer)

I’m glad I’m not the only one who thinks so. I have in worked in retail since high school, in almost every capacity. While I made some great connections while working at those places, the job of putting on a happy face and trying to help everyone is exhausting. And what made it worse? Even after I was at my job for two years and was trained as a manager, no one believed I, a young woman, knew anything.

They would ask to speak with the department managers, or in a few cases, ask if there was a man they could speak to. Both men and women have done this and are probably doing it somewhere right now, much to my chagrin. Most of us are familiar with this narrative, but unless you’ve worked a service job or talked intimately with someone who has faced these issues, you can’t imagine how retail employees feel trapped. I think it’s high time to shed a little light on this.

Every retailer store I’ve worked at uses the classic model “the customer is always right”. That’s not a bad way to treat people who have gotten a bum product or have questions, but it is very seldom true. The customer is not always right.

Correcting customers in the wrong is like herding cats. They could just go with it, they might realize what you’re trying to do, but most of them will go their own way or may snap at you. This creates fear of the customer, especially when they change very quickly.

Companies, say they can and managers can only handle so much and most of them aren’t even prepared to handle situations. Training videos might describe and demonstrate how to handle a grumpy customer or when to get a manager, but every situation is unique and management just can’t always be there. This creates both a feeling of independence and one of isolation.

Now for the most part there is hope—grumpy customers usually just vent or go to Customer Service or can be handed off to a department. The problem I have faced as a woman is when primarily male customers start to get to friendly, flirt, ask out, or in a few cases make blatantly sexual advancements. In my case, I’m lucky none of them have gotten physical, but that is not always the case.

I worked with a girl, we’ll call her Gene. Gene worked in a clothing store, and she was helping a man find some pants. Management was in a meeting and while we all had our radios on, we all had different projects in a fairly large store. Gene helped the man even though she could “feel his eyes wandering.” They talked for a while, because in the world of retail you want to get to know your customers to help them. He started making comments, trying to flirt. Gene felt uncomfortable but was polite, trying to keep things professional. He took this politeness as an invitation to ask her out. She declined. He got very mad and started yelling all sorts of obscenities which I heard, and I rushed over to ask the man as politely as possible to leave. He called me and the other mostly female workers other obscenities, and then management escorted him out of the building.

Now if you’re wondering why Gene didn’t radio for back-up initially, let me remind you. In retail/customer service positions, politeness is key. Presentation is key. You cannot be rude to a customer unless it is a last resort, because bad behavior on your part reflects poorly on the store, and in many places can get you into trouble. We had a good management team but it’s hard to call for back-up when your customer is standing right there watching your every move. In some cases, it’s genuinely terrifying. So radioing for back-up vaguely usually results in “What do you need?” “Is it a question I can answer?”, and when you don’t have a radio, you can’t just hand a customer off to someone else in the same way at all.

I can tell you that after this, we developed phrases, we had signals, and for a while we tried to help customers in pairs because it was so scary. There is no one you protect more than your friends at work, because they really do become your family.

The worst thing is though, while not to this extreme those little microaggressions that have made me as a woman uncomfortable happen every day, and retail workers have to put up with them. Eyes will look everywhere they shouldn’t, people will get asked if they have significant others, what they’re doing later, when they get off, etc. Certain regulars will pick you and go only through your line and say “See you later” in an all-too-familiar tone. The worst things that happened to me were verbal, but I refused to interact with those customers again, and I told my management so. Did I still have to interact with them if there was no one else around? Yes. Did I plan my quickest escape route as soon as I registered they were in the store? Yes. Did I smile and do my job despite my skin crawling? Yes.

Is politeness while someone working a reason to flirt with that person?

No, it is not. It never is. They’re doing their jobs and their job should not include compromising themselves so that you leave happy.

Or at least that’s what every retail handbook says.

A picture speaks a thousand words.

A Van Gogh piece might suggest, “warmth, radiance, summer.” While a piece by Salvador Dali could conjure up, “surreal, strange, unimaginable.” Now, what thousand words are recalled by this:

For one, it takes a couple of looks to even tell what product is being advertised. And second, I think more than a thousand words could go along with this picture. And they aren’t as radiant as a Van Gogh painting.

END_OF_DOCUMENT_TOKEN_TO_BE_REPLACED

If you have been keeping up with the University of Idaho news lately, you will notice the attention a 2013 sexual assault case is getting. The Idaho Statesman recently discovered a survivor’s testimony on a blog site, and ran a story that covered the investigation. (Read here). Long story short, the survivors did not receive the help from the athletic department they needed. Both people involved were athletes at UI, but the athletic department only protected the assaulter. The survivors then went to the Women’s Center, and the staff there took the case to the Dean of Students for an investigation. The assaulter was no longer allowed to play football at UI. However,  he is now playing for a team in New York (which I do not agree with, but that is a conversation for another day).

Throughout all of this buzz, I have heard some comments questioning why the survivor did not go directly to the Dean of Students. Some of these comments were in poor taste. Others were genuinely curious. Even though the two women who were sexually assaulted at UI chose to report their assault to the police and the athletic department, it is common for survivors to never report. But why?